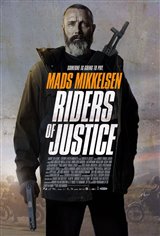 Markus (Mads Mikkelsen) returns home to care for his daughter Mathilde (Andrea Gadeberg) when an explosion on a train kills his wife. It's believed to be a tragic accident until a man who's a survivor of the wreck, approaches him shortly after and tell him he has the right to know the explosion was no accident.

The man, who is a mathematics genius and his friends, one of whom is a world-class computer hacker, join forces with Markus to find everything they can on Riders of Justice, including how many members they have, and what crimes they've been suspected of and convicted for. Once they have that information, Markus decides to go after his wife's killers to get revenge.