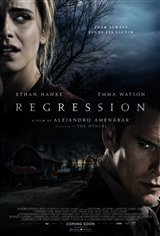 In a small Minnesotan town in 1990, Detective Bruce Kenner (Ethan Hawke) is working a case involving Angela Gray (Emma Watson), a young woman who accuses her father John (David Dencik) of being part of a Satanic cult that committed horrendous acts of crime against her.

John admits guilt, despite claiming to have no recollection of it. Dr. Raines (David Thewlis), a psychologist, is enlisted to help recover John’s memories. With his help, John is able to map out the disturbing events, piece by piece.

Meanwhile, a terrified Angela insists she's in danger for talking to Detective Kenner and tells him he is now in danger as well, because of what he knows.