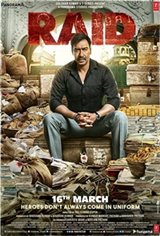 Raid is based on one of the most high profile raids the country has ever known and is the world's first film on income tax raids. Set in the 80s, a fearless IT officer carries out a non-stop raid at the mansion of the most powerful man in Lucknow despite all the attempts by the latter to get the officer removed.