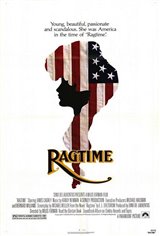 E. L. Doctorow's novel Ragtime was a sprawling fictional account of American manners and mores in the years between 1900 and 1913. Among the mosaic of colorful factual and fictional characters in the novel were escape artist Harry Houdini and radical Emma Goldman.

Both characters are all but eliminated in the film version, which only concentrates on three of Doctorow's many plot threads: The story of an immigrant artist (Mandy Patinkin) who becomes a movie director; the saga of Gibson Girl Evelyn Nesbit Shaw (Elizabeth McGovern), for whose sake playboy Harry K. Thaw (Robert Joy); kills architect Stanford White (Norman Mailer) and a lone black man's (Howard Rollins Jr.) quest for justice when his car is destroyed by a racist fire chief (Kenneth McMillan).

This last subplot consumes most of the film's running time, to the overall detriment of the pacing. There are also several scenes involving an unnamed upper-middle-class family (headed by James Olson and Mary Steenburgen) who are evidently meant to be the audience's eyes and ears, but are frankly not terribly interesting.

Back in 1981, Ragtime was given plenty of press coverage as the comeback picture for James Cagney, after twenty years in retirement. The problem is that Cagney's character (a police commissioner) isn't in the book, and his inclusion not only throws the story off balance, but necessitates the removal of several potentially interesting characters and events.

Another detriment is the gratuitous (and illogical) nudity in the Evelyn Nesbit scenes, which earned the film its R rating. An ornate misfire, Ragtime is of interest today only for its remarkable cast of veterans and stars-to-be, including Pat O'Brien and Eloise O'Brien, Donald O'Connor, Debbie Allen, Moses Gunn, Jeff Daniels and Fran Drescher.