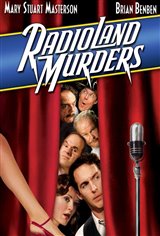 A blend of screwball farce and whodunit murder mystery, this madcap period piece was the brainchild of executive producer George Lucas.

In 1939, Penny Henderson (Mary Stuart Masterson) is the harried general secretary and de facto manager of a new fourth radio network, WBN. On the night that the Chicago station goes live on the air, a mysterious voice interrupts, and a series of murders soon follows, each one described by the same sonorous phantom.

While Penny and her staff desperately try to keep WBN's roster of shows afloat during the unfolding crisis, her estranged husband Roger (Brian Benben), a staff writer, becomes the chief suspect.

Roger is forced to dodge a detective, Lieutenant Cross (Michael Lerner), find the real killer, win Penny back, and perform last-minute script rewrites for an unhappy sponsor. As the backstage hysteria reaches a fever pitch, the show goes on with real-life radio-era pros such as George Burns and Rosemary Clooney.

Although never explicitly pointed out in the film, Radioland Murders (1994) was a pseudo-prequel to an earlier Lucas feature -- Roger and Penny are the future parents of Curt Henderson (Richard Dreyfuss) from American Graffiti (1973).