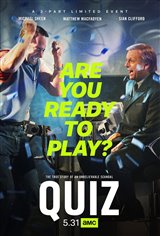 Former British army major Charles Ingram (Matthew Macfadyen) caused a major scandal in 2001 after he was caught cheating his way to winning £1 million on the game show Who Wants To Be A Millionaire?

He correctly answered 15 questions in order to win the jackpot of £1 million, but didn't receive the money after it was suspected he had cheated. The organizers of the show were immediately suspicious following the outcome, and claimed that Ingram's wife, Diana (Sian Clifford) and and an accomplice, Tecwen Whittock (Michael Jibson), had been coughing at crucial moments as Ingram answered.

The couple were brought to trial for conspiring by coughing during the recording to signify the correct answers to the multiple-choice questions posed by the host, Chris Tarrant (Michael Sheen).