Queen of the Desert - Story 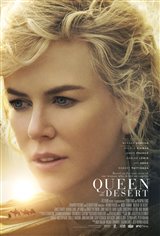 Gertrude Bell was born July 14, 1868 in Durham, England. She was the firstborn of Mary Shield Bell and Hugh Bell, who were part of the sixth-richest family in England. In her early years, she was cared for by her nanny, Miss Ogle, and when she was only three, her mother passed away in childbirth after giving birth to a son, Maurice. As Gertrude grew older, she was given the notion that her greatest role model should be the monarch herself, Queen Victoria.

According to those who taught her, Victoria was the image of grace and morality. She shared interests with other young girls her age—playing tennis, taking up sewing and learning about literature, music and art.

In 1876, Gertrude’s father Hugh married 24-year-old playwright Florence Olliffe, and it was through her Gertrude experienced the world of intellectuals and poetry. Florence was strict with Gertrude, deciding which books the girl should read and scrutinizing her social life.

Gertrude had no desire to lead a rudimentary, homely life as an Englishwoman. Her ambition stretched far beyond the confines of her country’s borders, and she longed for an escape from the limited experience a life there would bring. Hugh and Florence agreed to send her to a girls-only college in London.

Shortly thereafter, she attended Oxford University. The attitude towards women was no different at Oxford than it was anywhere else in England at the time—the principal of the women’s school, Miss Wordsworth, encouraged marriage and found the world of intellectual ideas to be extraneous to a woman’s education. Despite the mentality of her superiors, she became the first woman to obtain a first class in history in 1888.

After graduating, Gertrude gained an insight into the world of politics and governance through her grandfather, Sir Issac Lowthian, who was a member of parliament. She would subsequently explore parts of Europe, including Bucharest and Istanbul, in pursuit of experience outside of her English home, and in pursuit of a husband. Her pursuit for the latter proved futile, and after years of failed attempts at courting, she decided to travel to the Middle East.

On May 7, 1892, Gertrude reached Tehran, where her uncle Sir Frank Lascelles was serving as a British Minister. She found the experience fascinating, as she was exposed to the desert of the Middle East for the first time.

In the years following, she explored the world, including India, China, Canada, and the United States, but she maintained a longing to return to the warm deserts of the Arabic world. She was well-versed in the language, as well as Persian and Turkish, and in 1900, she returned. Her writing career had already been initiated prior, with the publication of her travel book. Safar Nameh: Persian Pictures (1894) chronicled her time in Persia and with The Desert and the Sown (1907), a showcase of her time in various cities outside Syria including Jerusalem and Beirut, she had established herself as an authority on the Middle East. She would subsequently travel to Mesopotamia and explore the unfound lands and ruins, and her study in these areas of the world informed the otherwise unknowing British world.

When the First World War began in 1914 after the assassination of Archduke Franz Ferdinand, Gertrude hoped to be posted in the Middle East, where her knowledge and expertise could aid in gaining British influence in the troubled area. She was denied, but the next year, she was brought to the Arab Bureau in Cairo, where alongside archaeologists T.E Lawrence and Leonard Woolley, she would help map geographical locations. She would subsequently play a key role in the British army’s foray into Baghdad, providing detailed maps and serving as a mediator between the British and the Arabs.

In a fight against Turks, the Arab tribes united under one leader, Faisal, the third son of Sharif Hussein, and succeeded in overthrowing the Ottomon Empire.

In the fallout of the war, an agreement between the French and the British in 1916 cited the need for rule in the Arab world. When Gertrude was called upon to help aid in the discussions, she gave her unwavering support for a self-sustaining Mesopotamia, citing the ability of the Arabs to self-govern. This was met with strong disagreement, as the British had fought to preserve their influence over the Middle East due to the oil that flowed below their land.

Eventually, an agreement was reached to have Britain watch over Mesopotamia until a suitable time came to give it to the Arabs. However, after 18 months, they still hadn’t instated an Arab government. Rebellion resulted and by its end in 1920, 10,000 Arab lives had been lost.

Gertrude had aided in communications between the British and Arab world, and now, would be a part of the reconstruction of it. Her biggest task came in 1921, when she attended a conference in Cairo convened by Winston Churchill in order to outline the borders of a new country: Iraq.

On July 12, 1926, two days before her 58th birthday, Gertrude Bell died suddenly of an overdose of sleeping pills. It’s unknown for certain whether the overdose was accidental or intentional, but according to the biography Desert Queen: The Extraordinary Life of Gertrude Bell by Janet Wallach, her closest friends knew she suffered from a dark depression, and her servant admitted Gertrude had asked for an extra dose of pills the night she died. Her legacy as a writer, explorer, and archaeologist will live on in the books she wrote, maps she created, and lines she had drawn in the sand.