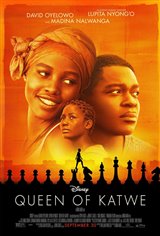 Now an international chess champion, Phiona Mutesi had a rough upbringing in the Ugandan slum of Katwe. When she was about three years old, her father died of AIDS. Shortly afterwards, her older sister Juliet died as well. Phiona had to drop out of school at the age of six because because her mother could not afford the fees.

With her family living in poverty, Phiona, who could not read or write, began selling boiled maize from a saucepan on her head by the age of nine. Her mother Harriet suffered from constant illnesses and feared that she was HIV-positive as well, but she was too frightened to get tested. Phiona herself contracted malaria at the age of eight but survived after doctors removed fluid from her spine.

One afternoon in 2005, Phiona secretly followed her older brother Brian and found him playing chess at Sports Outreach Institute, a Christian mission that provides relief and religion through sports to the world's poorest people.

That was where she met Robert Katende, a former soccer player. He was assigned to Katwe to teach soccer, until he realized some of the children were not allowed to play sports because their parents were afraid they might get injured, and they had no money for medical bills. He eventually settled on chess as an alternate activity, but was worried because chess was so foreign in Uganda, that there is no word for it in their language (Luganda).

Robert began teaching Phiona everything he knew about the game, and recognized her prodigal skills early on. With his mentorship, Phiona become an international chess champion just four years after learning the game. First, in 2009, Phiona and two boys from Robert’s Katwe chess project represented Uganda in Africa’s International Children’s Chess Tournament in Sudan. By the age of 11, the win made Phiona Uganda’s junior girls champion.

Two years later, in the 2012 Chess Olympiad in Istanbul, she became Uganda’s first woman ever to earn a chess title, Woman Candidate Master. It was Phiona's first step on the ladder toward grandmaster — the highest title a chess player can attain. At just 14 years old, Phiona was already playing chess around the world.

With help from the Sports Outreach Institute, Phiona was able to return to school and can now read and write.

The chess prodigy's life story has been portrayed on screen in a Disney movie called Queen of Katwe, based on a book about Phiona's life by Tim Crothers. The film is directed by Mira Nair, and stars David Oyelowo and Lupita Nyong’o. Phiona will be portrayed by Madina Nalwanga. ~Natalia Makarski