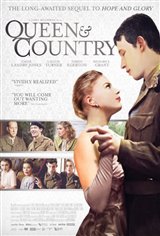 Now 18, Bill Rohan (Callum Turner) is drafted into the army where he meets the eccentric Percy Hapgood (Caleb Landry Jones) and the two form a friendship. Bill and Percy are appointed to be sergeant instructors, entrusted with the training of other recruits.

However, their fussy Sergeant Major (David Thewlis) lives by order and rules and keeps the two young recruits under his thumb. To retaliate, Percy comes up with a number of pranks and is helped by Bill in executing them with glee.