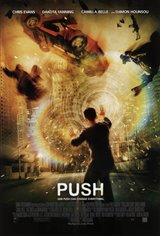 A shadowy government agency known as the Division is rounding up psychics for experiments designed to boost their powers and assemble the most commanding army the world has ever seen. Unfortunately, almost no one has ever survived these trials. Nick Gant (Chris Evans), a second-generation telekinetic, or "mover," has been in hiding since the Division murdered his father more than a decade earlier. He has found sanctuary in densely populated Hong Kong.

Nick is forced out of hiding when Cassie Holmes (Dakota Fanning), a 13-year-old clairvoyant, or "watcher," seeks his help in locating a briefcase that she claims holds $6 million. To find it, they will also have to find Kira, (Camilla Belle), an escaped "pusher" who is the only person ever to live through the Division's experiments. Pushers possess the most dangerous of all psychic powers: the ability to influence others' actions by implanting thoughts in their minds. But Cassie's presence soon attracts the attention of the Division's human bloodhounds, forcing Nick and Cassie to flee for their lives.

With the help of a team of expatriates with an array of special abilities, the unlikely duo winds a path through the city's most secret corners, trying to stay one step ahead of the authorities in their search for Kira. With Cassie's visions guiding them, the pair moves closer to their goal, but finds themselves competing with a family of deadly psychics for the suitcase. Even more dangerous is Division Agent Henry Carver (Djimon Hounsou), a powerful pusher who needs both the contents of the case and Kira in order to create an unstoppable paranormal militia. Outgunned and outnumbered, Nick, Cassie, Kira and their allies must figure out a way to outsmart Carver if they are to prevent him from carrying out his sinister plan.