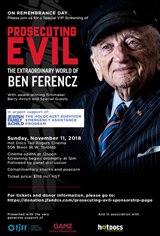 Following The Nuremberg Trials post-World War II, Ben Ferencz was instrumental in developing justice for victims of crimes against humanity.

The son of Romanian immigrants who fled anti-Semitism for New York City, Ferencz won a scholarship to Harvard Law School. He joined the U.S. Army and in 1945, he was tasked with setting up a war crimes branch and collecting evidence. He was sent to the concentration camps as they were liberated. What he saw traumatized him for the rest of his life and instilled in him an ongoing desire to see a world in which those responsible for atrocity crimes are held to account.

He gathered enough incriminating evidence to prosecute 22 Einsatzgruppen Nazis, responsible for murdering over a million people – a trial of which he was the lead prosecutor at the Nuremberg war crimes trials. Called the biggest murder trial in history, Ferencz was only 27 years old, and it was his first case.

Ferencz’s message is that there is little sense in denouncing aggression, terrorism, and other crimes against humanity unless these offenses became part of an accepted international criminal code enforced by an international court that delivers a structure for peace. Ferencz believes that if law trumps war, you can change the world.