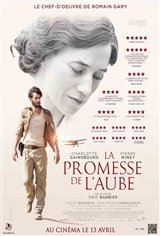 Poland, early 1920s. Nina Kacew, a Russian Jew, lives in the small town of Wilno with her only son Roman. Possessive and intrusive, the single mother is convinced that her son has a bright future. When her clothing company goes bankrupt in 1928, Nina leaves Poland for Nice, France, where she starts a new business. Meanwhile, Roman starts writing. In 1935, while studying in Paris, his first story is published by a newspaper, to his mother’s great pride. But the years that follow are not as glorious for him. At the end of his military service, he’s denied the rank of lieutenant on the grounds that he is Jewish. Then, the war breaks out and his literary career comes to a standstill.