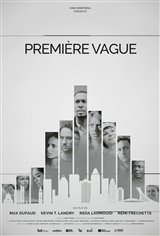 At the end of 2019, the first cases of the COVID-19 virus were reported in Wuhan, China. On March 13, Premier François Legault announced the provincial government was declaring a state of health emergency throughout Quebec. A few days later, the economic activity in the province was put on hold.

Having arrived in Montreal a month earlier, hairdresser Fanny scrupulously respects public health instructions, unlike her reckless roommate and the party boy she started to see before the start of the pandemic. An employee of a management firm, Samuel gets used to working from home. When his partner leaves him, reproaching him for his egocentricity and his inability to listen, he takes the opportunity to reinvent himself.

Selling her charms on the Internet to pay her rent, Marianne cannot count on her brother, stranded in Mexico, when their mother is diagnosed with COVID-19 at a long-term care facility. As for delivery man Daniel, he tries the best he can to watch over his father, who is confused and in a wheelchair, but still trying to leave the apartment at every opportunity.