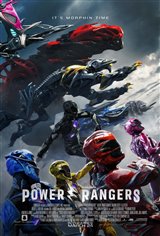 Fans of the Power Rangers television franchise will finally get to see the show's first season re-imagined as a big budget Hollywood film in 2017, but what about those unfamiliar with Angel Grove's favorite sons and daughters? We may not be Zordon, but we can certainly give you a mighty morphin crash course!

Both franchises, which continue to produce new episodes as of 2017, have the same basic premise. A group of young people either acquire or already possess the ability to transform into a team of superheroes with superpowers. Each episode has a monster of the week, deployed by the series' overarching villain. Repetitive? Yes. But don't try to fix what hasn't broken for over 40 years in Japan, and 25 in North America.

Here's the mighty condensed premise of the first season of Power Rangers. Zordon, quite literally a talking head, is a cosmic identity who selects five teenagers in Angel Grove, California to become the Power Rangers, because they have "attitude." Zordon is assisted by his annoying robot Alpha 5: imagine C3PO from Star Wars, but even more flamboyant. The Rangers are tasked with defending Earth from Zordon's sworn enemy, Rita Repulsa.

While the Sentai footage helped the first few seasons of Mighty Morphin Power Rangers establish its villains and fight scenes, the development of the main characters had to be done from scratch. The formula was simple: Red Ranger is the brave leader, Pink Ranger is a girly girl, Blue Ranger is a nerd, Black Ranger is witty and Yellow Ranger is soft spoken.

Rita is an evil sorceress bent on conquering the world. Each episode, she dispatches her foot soldiers, the Putty Patrol, along with a monster. The Rangers best the foot soldiers, while the monster usually proves to have more cunning. Eventually the Rangers defeat the monster, at which point Rita uses her magic to transform her monster into a giant. The show then shifts to Sentai footage dubbed by the American cast.

The Rangers must now rely on their Zords; mechanical beasts with cockpits that can be piloted by the Rangers. The Zords can combine to form a Megazord, a giant mechanical man all five Rangers can pilot. The Megazord saves the day and the Rangers learn that week's lesson.

This formula is simple, but it has served the franchise well. One more hallmark of the Power Rangers franchise was introduced in the show's first season: the sixth Ranger. The sixth Ranger (green in the first incarnation, and various colors in other seasons) arc is one of the anti-hero, the rogue. We've seen this with Wolverine in X-Men, Jack Sparrow in Pirates of the Caribbean, and Han Solo in Star Wars.

The Green Ranger arc is one of the best remembered in season one, and helped to elevate the dramatic tensions of the show beyond the monster of the week formula. No matter the season, the sixth Ranger is always morally conflicted. The sixth Ranger equals or surpasses the Red Ranger in power, creating even more conflict as the Red Ranger is usually the de facto leader. Tommy Oliver, season one's Green Ranger, would ultimately become the most powerful of the Mighty Morphin Power Rangers. He eventually becomes the Red Ranger, and has also appeared in more recent seasons of Power Rangers. Tommy Oliver is the most revered and respected protagonist in the history Power Rangers, and it all started in season one with his anti-hero arc as the Green Ranger.

The upcoming Power Rangers film is based on the show's first season. While we can't be certain how the cinematic Rangers will defeat Rita, there may be a hint in the television series. The main theme of season one is technology vs. magic. The Rangers utilize technology, as evidenced by their mechanical Zords and projectile weapons. Rita and her monsters rely on magic and superstition. It's likely our heroes will kick Rita's butt using their brains and gadgets, instead of brawn.