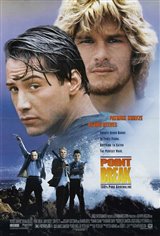 There, four bank robbers, who wear rubber masks and call themselves Ex-Presidents, have executed a series of successful robberies which embarrassingly have the FBI stumped. Utah, and his partner Pappas (Gary Busey) suspect that the robbers are surfers and hatch a plan for catching them.