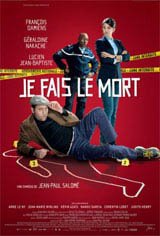 Jean Renault, a 40-year-old actor, won the César Award for Best Male Newcomer twenty years earlier, but today he’s lucky to get a bit part on a bad television show. When he goes for awhile without working, the employment agency persuades him to take a job playing a murder victim in a police homicide reenactment. He’s cast as the victim in the reconstitution of a murder that occurred a year earlier at a ski resort. Against the advice of Noémie Desfontaines, the young judge whom he met on the train ride to the resort, Jean sets out to demonstrate that the crime couldn’t have played out the way it’s been reconstructed. The case has too many improbabilities and the conclusions of the investigation are too convenient. Ignoring the protests of the authorities and people involved in the case, the actor becomes a private detective, a talent he didn’t know he possessed.