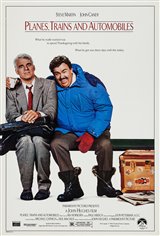 Neal Page (Steve Martin) is an advertising executive who just wants to fly home to Chicago to spend Thanksgiving with his family. Although his meeting runs late and he misses his cab, he finally gets on the plane. However, the plane is diverted to Wichita due to the blizzard in Chicago, so Neal and his seatmate Del Griffith (John Candy)—a talkative, but loveable salesman, have to share a motel bed for the night.

While they're asleep, their money is stolen by a burglar, so they decide to take a train home—in separate cars. When the train breaks down, the two are reunited and Del sells some of his goods to raise money for bus tickets for both of them. Over the next three days, Neal and Del go on a cross-country, wild goose chase to get home to Chicago.