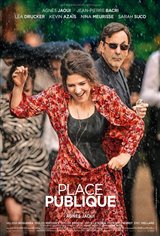 TV producer Nathalie moves to a home in the country and invites her parents, friends and celebrities to a housewarming party. Castro, the middle-aged host of her show, doesn’t realize when he arrives at the party that he’s at risk of being replaced by a younger host.

Also attending is Nathalie’s sister, Hélène, who happens to be Castro’s ex-wife, as well as their daughter, Nina, whose vitriolic book about her family is about to launch. When Castro’s girlfriend Vanessa is delayed, he can see on his taxi app that her driver stopped somewhere for half an hour.

He’s consumed by jealousy, much to Hélène’s amusement because Castro cheated on her throughout their marriage. Although Nathalie and Castro’s show focuses on France’s rich and famous, Hélène tries to get them to book an Afghan refugee, whose story is a lot more important than their usual guests.

But, as it becomes clear during the party, people are obsessed with celebrity and fame, no matter how shallow that may be.