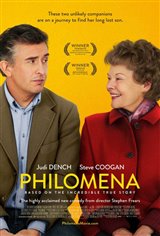 When her mother died, Philomena Lee was only six years old. She was entered into a convent school and stayed there until she reached age 18. Philomena soon came to realize she knew little about the realities of living in the outside world. She had no idea where babies came from, so when she met a man and became pregnant, it came as a complete surprise.

As her pregnancy became obvious, Philomena’s father disowned her. She was sent to a country convent as a “moral degenerate.” On July 5, 1952 Philomena gave birth to a baby boy whom she named Anthony. She stayed there for three years, working hard in the convent laundry. All the young mothers at the convent were given an hour a day with their children for three years, then they were taken away and adopted. Philomena was heartbroken. Mother Superior threatened her with damnation if she uttered a word about her “guilty secret” and she kept quiet for half a century.

Philomena then worked at a home for delinquent boys, which was run by the convent. In 1959, Philomena got married and had two more children, but kept their lost brother a secret. For nearly 30 years she worked as a nurse in a psychiatric hospital.

Between the years 1956 and 1989, Philomena went back to the convent several times to beg the nuns to help her find her son. However, the nuns refused to help.

Just before Christmas of 2004, Philomena told her daughter the secret she’d been longing to reveal. Her daughter quickly told a friend, who approached journalist Martin Sixsmith at a New Years Eve party and asked him for help solving the family mystery. Intrigued by the story, Martin agreed.

He learned that the nuns who ran the convent for wayward girls was paid for every mother and baby in their care. He found out that the girls had to stay and work as free labor for three years, or pay £100 if they wanted to leave early. He discovered that the “orphans” had been sold to the highest bidder—usually wealthy Americans—for between $2,000 and $3,000.

Philomena and Martin set off for the United States, searching through newspaper obituaries, state and church archives, adoption agencies and University records. They discovered that Anthony had been adopted by a Catholic couple from St. Louis, Missouri. His name had been changed to Michael Hess and they learned he’d spent years searching for his birth mother. He had dim memories of his three years in Ireland and wanted to find out the truth about his mother but each time he went to the convent to ask for help, he’d been turned away.

Unfortunately, by the time Philomena learned this, Michael had passed away in 1995 from complications due to AIDs. Before his death, Michael was a successful lawyer who worked for the Republican Party. When George Bush Sr. came into office, Michael was appointed his chief legal counsel. However, in his personal life, he felt unloved by his adoptive family and turned to alcohol, drugs and casual sex with other gay men. Along with his partner Pete, Michael went back to the convent in 1993 and asked if when he died, his gravestone could provide enough information for his mother to find him. Two years later Michael passed away and Pete fulfilled his wishes, burying Michael’s ashes in Ireland near the convent where he was born.

Although unhappy to find her son died believing his birth mother gave him away, Philomena does not hold any grudges. She was happy she found out the truth about her son and happy for all the success he found with his work. Believing everything happens for a reason, Philomena has found a way to forgive.

Martin Sixsmith took Philomena’s inspiring story and wrote the 2009 novel The Lost Child of Philomena Lee. Screenwriter/actor Steve Coogan heard about Philomena and bought the movie rights to the novel before he’d even read the book. He adapted the story into the film Philomena, starring Dame Judi Dench as Philomena and himself as Martin Sixsmith. Originally Philomena didn’t like the thought of her secret being revealed in the book and wanted her identity to be kept hidden, but in the end, she decided it was important for her story to be told and is happy with the book and subsequent movie. She penned a letter to a writer named Kyle Smith of The New York Times following a particularly harsh criticism of the movie, calling it an attack on the Catholic faither.

She responded: “Kyle, Stephen’s movie about my story is meant to be a testament to good things, not an attack. It is a testament to the undying bond that’s exists between mothers and their children, something that I’ve found time and distance have no bearing on. It is a testament to the willingness to never give up on keeping that bond alive, even if all odds are pointing you against it. It is also a testament to the fact that no matter how old we grow, there is always a chance we will meet someone, however different from us, that might impact our views on humanity and help guide us on a new, if perhaps unforeseen, path.”

The movie has already won numerous awards and nominations, including nine awards at the 2013 Venice Film Festival.