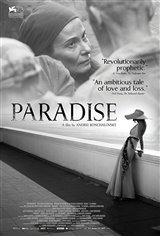 In 1942, during WWII, the paths of three people cross. Olga, a Russian aristocrat who joined the French Resistance, is arrested by the Nazis for hiding Jewish children. Jules, a French-Nazi collaborator  who has grown fond of Olga, can’t stop her from being shipped to a concentration camp, where she experiences hell on Earth.

However, she meets Helmut, a high-ranking SS officer of  German nobility, who was once madly in love with her and obviously still has feelings for her. He decides to somehow rescue Olga.