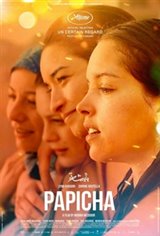 In the 1990s, Nedjma, enrolled in French studies at the University of Algiers, makes dresses, which she secretly sells to "papichas" (pretty girls) in the city’s nightclubs, with the help of her best friend Wassila. When her journalist sister is killed by an Islamist activist in front of their mother's house, the student makes a gesture of resistance, fraught with consequences: she organizes a fashion show on campus grounds, which combines traditionalism with modernity.