Once Upon a Time In America 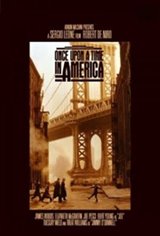 Ex-gangster David Aaronson (Robert De Niro) is drawn back to New York City after years of being in hiding, despite his vow to never return after the deaths of his friends in the lower East Side. David reflects back on his life, spanning five decades of major American revolutions starting in the 1920s, when he first began his career in organized crime. As David pieces together his past he discovers new truths about his friends' deaths.