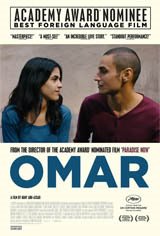 Omar (Adam Bakri) is a young Palestinian baker who often surreptitiously climbs over the separation wall to join his childhood friends, Tarek (Eyad Hourani) and Amjad (Samer Bisharat), who live in a village on the other side. He's secretly in love with Tarek's sister Nadia (Leem Lubany) and is saving up to marry her.

After finding out he faces 90 years in jail without appeal, he is offered a deal by the prison warden. He'll be released for a month only if he leads them to Tarek, who's in hiding.

However, when he returns to his friends, claiming the Israelis didn't have enough evidence to hold him, Nadia and Amjad are suspicious.

In Arabic and Hebrew with English subtitles.