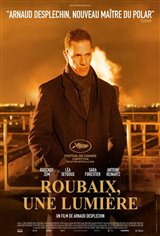 A once prosperous city in the north of France, Roubaix is now in decline, but is protected by Commissioner Daoud, who has a strong attachment to this place where he was born. On Christmas Eve, the veteran welcomes Louis, a new lieutenant who just graduated from the police academy, to his team. Together, they conduct three investigations simultaneously: the sexual assault of a teenage girl, perpetrated according to the MO of a serial rapist; the fugue of a young Maghreb woman in revolt against her father; and an arson attack in a neighborhood with a bad reputation. Claude, the mother of a six-year-old child, and her friend Marie are witnesses in this last case, but become the main suspects when, a few days later, their elderly neighbor is murdered.