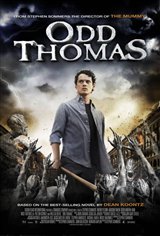 A clairvoyant short-order cook (Anton Yelchin) named Odd Thomas tries to do his best for the ghosts who seek him out. They want different things from him—often justice because they were murdered, in which case he helps the police solve the crime and put the killer behind bars. Others want to prevent a crime from happening.

When a suspicious-looking man comes in in the diner followed by shadowy spirit creatures, Odd fears the worst. The creatures only appear during times of death and disaster and Odd believes this man may be connected to a terrible catastrophe that is about to occur, so he tries to learn more about him.

Based on the New York Times Bestselling novel by Dean Koontz.