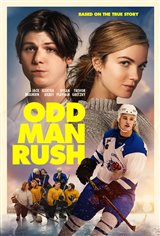 When Bobby Sanders' Harvard hockey career ends with more surgeries than goals, he scores a spot on the fringes of pro hockey in the European minor leagues, ultimately landing in northern Sweden after being traded for a washer/dryer combo. But Bobby’s relationship with the Swedish check-out girl at the local market forces him to confront the reality of his childhood dream before the Hockey Gods intervene.

Based on Bill Keenan’s best-selling memoir, ODD MAN RUSH is a comical coming-of-age story set in the quirky world of European minor league hockey. The film chronicles the hijinks of Bobby Sanders, a hockey-obsessed kid from New York City, who dreams of playing in the NHL.