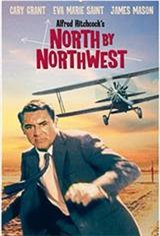 In North by Northwest, Cary Grant stars as hapless New York advertising executive, Roger Thornhill, who finds himself at the wrong place at the wrong time when he is mistaken for a government agent by a group of foreign spies.

Set up for murder, he is relentlessly pursued across the country while he looks for a way to survive. All of Roger's attempts to straighten things out only make matters worse, and soon the desperate man is on the run from murderous foreign operatives, the CIA, and the police.