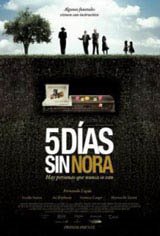 When he goes to his ex-wife Nora's home to deliver a package that arrived in the mail for her at his address by mistake, José discovers that she's committed suicide. He tells his son, who's on his way to the United States. When Rabbi Jacowitz arrives, he explains that due to Passover, if Nora is not buried that same day, they'll have to wait five days to carry out the burial.

José comes to realize that Nora planned her death on the Sabbath before Passover in order to give everyone time to arrive. While parents and friends converge on the apartment of the deceased, Jose revisits their marriage in his mind and discovers a mysterious photograph left under her bed that leads to an unexpected outcome.