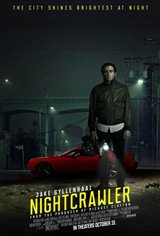 Lou Bloom (Jake Gyllenhaal) is not having much luck with his job search. After witnessing an accident, he quickly finds himself caught up in the underground and nocturnal world of freelance crime journalism, scouring Los Angeles for gruesome crime-scene footage.

Lou becomes entranced with this world and quickly progresses in the field, even beating the police to crime scenes. However, he begins taking risky liberties—including moving bodies to get a better shot. He finds himself in trouble with the law when he is accused of withholding information from the police in order to catch a murderer himself.