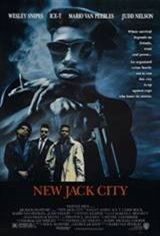 The ruthless leader of a New York City drug syndicate battles to maintain his power and avoid imprisonment in this fast-moving action drama.

While the film's heroes are Scotty (Ice-T) and Nick (Judd Nelson), a pair of tough, streetwise cops, the main focus is their target, drug lord Nino Brown (Wesley Snipes). A criminal businessman with no room for pity or emotion, the flashy but severe Brown has built an empire and transformed an abandoned Harlem apartment building into a well-defended fortress.

He begins to consider himself invincible, but his lust for power and the unpredictable actions of a former client turned police informer threaten to bring about his potential downfall. First-time director Mario Van Peebles keeps the traditional plot moving at an appropriately rapid pace, with stylish action sequences and energetic performances.

The film's violence was somewhat controversial on its initial release, especially after shooting incidents marred showings in several theaters. However, the film's moral message is clearly anti-drug and anti-crime, its main intent to provide a high-powered, modern take on the gangster movie.