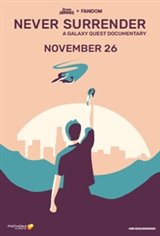 Never Surrender explores the hard work it took to create Galaxy Quest, from the people who were there, along with the enduring legacy and popularity the film has earned for itself.