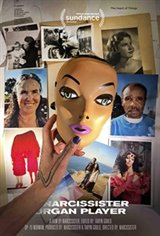 Narcissister Organ Player is originally a Bessie Awards nominated performance that takes place in a metaphorical restaurant where Narcissister, unsated by a few spinach leaves, tries to eat the restaurant furniture and ends up consuming herself by entering and traveling through her own body, represented by an enormous onstage puppet.