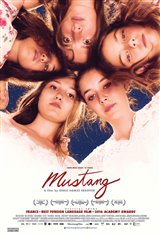 4 votes and 3 Reviews | Write a Review

In a remote Turkish coastal village on the Black Sea, children play in the water after they're released from the last day of school. Still wearing their school uniforms, they give piggy back rides and splash each other. When a woman witnesses what's going on, and sees that five sisters who are her neighbors are involved in the fun, she reports what she considers to be scandalous behavior to their grandmother and uncle, who have been the sisters' guardians since the death of their parents.

The sisters are punished severely and all "instruments of corruption," such as cell phones and computers, are taken away. They're forced to wear shapeless brown dresses and bars are installed on the windows. As the older sisters are subjected to virginity tests, then married off one by one, the younger sisters resolve to avoid the same fate.