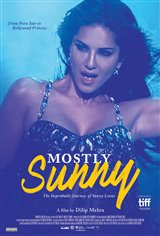 Born in Canada and raised in America, Karenjit Kaur Vohra worked as a nude model and adult film star under the name Sunny Leone for years. But she longed for work that offered more depth, and embarked on a journey into India's mainstream popular cinema to find it. Although developing a career in Bollywood wasn't a smooth process, she persevered, and with the help of her husband Daniel Weber (who is her manager, and an actor-musician in his own right), she reached her goal.

The film depicts Sunny's transition from the adult-film world to that of Bollywood, and proves that Sunny has indeed made it among India's film stars, even though the Indian community in her Ontario hometown largely ostracizes her.