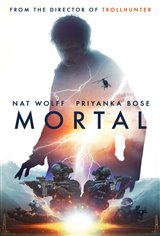 Eric (Nat Wolff), a drifter, travels around Norway after disappearing from the United States following an arson that burned down a building, leaving him the only survivor. One day, while minding his own business, he's followed by a group of young bullies looking for trouble. He walks away, but one of the boys follows him and shoves him to the ground. Eric warns the boy that if he touches him again, he will burn.

Later, in handcuffs, as he recounts what happened to a psychologist named Christine (Iben Akerlie), the woman doesn't believe his story at first, until she sees what he can do with her own eyes. Police Chief Henrik (Per Frisch), who arrested him, wants Eric to be returned to America, but that only escalates the problem.

Christine tries to help Eric, who can't control his power or stop from unwillingly hurting people. She believes that if he can understand how his inner turmoil controls his electromagnetic outbursts, he could redirect his energy and power for good.