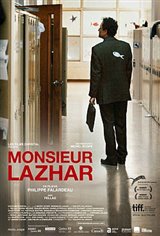 When an elementary school teacher commits suicide one night after class, the school's overworked principal has a hard time finding a replacement. Bachir Lazhar, a middle-aged Algerian immigrant seeking political refuge in Quebec, applies for the job, saying he has experience as a grade school teacher in his home country.

When Bachir is hired, he finds he has to deal with Simon, a 10-year-old boy who's traumatized because he was the one who discovered his teacher's body, and a girl whose interpretation of the event causes her to feel resentment towards Simon. Bachir begins to care for his students, hoping to prepare them for the future, but runs into opposition from parents who want him to maintain a professional distance.