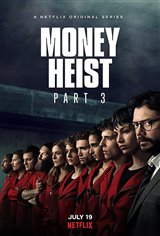 This original Netflix series, originally titled La Casa de Papel, follows the Professor (Álvaro Morte), a criminal mastermind who brings eight thieves together to take hostages and lock themselves in the Royal Mint of Spain as he manipulates the police to carry out his plan.

Part 2 picks up as the police close in on the Professor's identity. His lack of communication with the Mint team leads to mutiny and the arrest of one of the thieves.

In Part 3, the Professor and his team reunite to free Río, this time targeting the Bank of Spain with a daring and dangerous new plan. The Resistance continues.

In Part 4, lives are on the line as the Professor's plan begins to unravel and the thieves must fend off enemies from both inside and outside the Bank of Spain.