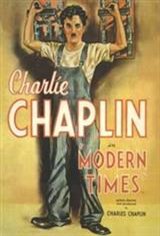 Playing a tramp struggling to survive in a modern industrial society, Charlie Chaplin created with MODERN TIMES, one of the most elaborate cinematic critiques of the effects of mass production on 20th century life. With his usual charm and bad luck, Charlie Chaplin's most famous character The Tramp, executes some of his most famous slapstick routines around massive/glorified machines, accidentally ends up in the middle of a communist rally, and falls in love with a street waif played by Chaplin's then real-life partner Paulette Goddard.