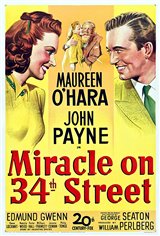 Susan Walker's (Natalie Wood) mother Doris (Maureen O'Hara) works for Macy's Department Store in New York. As the special events director, she has to quickly find a new Santa when it's revealed the actor playing him in the Thanksgiving Day parade is drunk.

Mrs. Walker asks the old man (Edmund Gwenn) who discovered the man was drunk to stand in as Santa, and then recruits him as the store Santa at Macy's Department store for the holiday season.

Although the public loves him, it turns out that the man calls himself Kris Kringle and really believes he is Santa. Soon he has Susan, who was told by her mother that Santa doesn't really exist, believing in him.