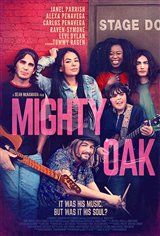 The band Army of Love is taking the music scene by storm, lead by brother and sister Gina (Janel Parrish) and Vaughn Jackson (Levi Dylan). They finally have their big break and are given a chance to open for Arcade Fire. But everyone's lives are turned upside down when the band gets into a tragic car accident, and Vaughn is killed.

A decade later, the band has gone their separate ways. Gina is still struggling with the loss of her brother. That all changes when 10-year-old guitar prodigy Oak Scoggins (Tommy Ragen) moves into town and impresses everyone with his skills. Gina is convinced Oak is the reincarnation of Vaughn and gets the band back together, with Oak as the new lead singer.