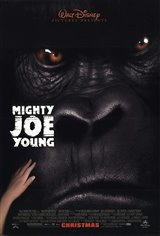 A remake of the 1949 version that goes by the same name, this time out it's the fetching Charlize Theron who plays the orphan who's discovered living in Africa with an unusually large ape as one of her friends.

The zoologist (Paxton) who stumbles about the two is soon part of an ape/woman/man triangle as the trio flees to Los Angeles one step ahead to poachers. Once in L.A., Mighty Joe becomes an instant celebrity. But as fame goes to his handler's head, something bad happens and Joe goes out and starts wreaking havoc on downtown L.A. (no word on how-the-heck he found a "downtown" in L.A.).

No real apes are used in the film. Says director Underwood, "I made a decision not to use any real gorillas. They're really bad at taking direction."