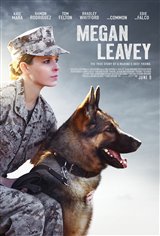 When her best friend dies, Megan Leavey (Kate Mara) feels lost. Tired of living with her mother and stepfather, Megan joins the U.S. Marines. While there, she finds her purpose as she's cleaning out the dog kennels, and asks to join the K9 division.

She's partnered with their most aggressive dog, Rex, but manages to form a bond with him as they're shipped overseas. The two save countless lives in their missions to seek out hidden bombs and IEDs, but on one such mission, a car explodes and both are thrown into the air.

Injured, Megan is sent home to the States, but is disappointed that Rex isn't retired from duty as well, as he was also injured. She can't bear to be separated from Rex, who's sent back overseas to continue active duty. She fights to get him released as the hero he is and adopt him as her own.