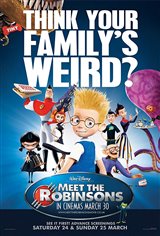 Lewis is a brilliant twelve-year-old with a surprising number of clever inventions to his credit. His latest and most ambitious project is the Memory Scanner, which he hopes will retrieve early memories of his mother and maybe even reveal why she put him up for adoption. But before he can get his answer, his invention is stolen by the dastardly Bowler Hat Guy and his diabolical hat - and constant companion - Doris.

Lewis has all but given up hope in his future when a mysterious boy named Wilbur Robinson whisks our bewildered hero away in a time machine and the two travel forward in time to spend a day with Wilbur's eccentric family. In a world filled with flying cars and floating cities, they hunt down Bowler Hat Guy, save the future and uncover the amazing secret of Lewis' future family.

Based on the book "A Day with Wilbur Robinson" by William Joyce.