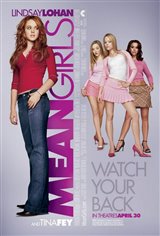 Watch Trailer   Movie Times
After living in Africa, Cady Heron (Lindsay Lohan) is a cultural blank slate when she first sets foot on the grounds of North Shore High School in a small town outside Chicago, Illinois. Cady has no idea how "wild" things can be in civilization until she crosses paths with one of the meanest species of all - the "Queen Bee," who at this particular high school is the cool and calculating Regina George (Rachel McAdams).

But Cady doesn't just cross paths with this Queen Bee; she really stings her when she falls for Regina's ex-boyfriend Aaron (Jonathan Bennett). Now Regina's set to sting back by pretending to like Aaron so he won't go out with Cady, all the while pretending to be her friend. With no choice but to use the same M.O. to stay in the game, the "Girl World" one-upmanship escalates until the entire school gets dragged into a first-class mean-fest.

Surrounded by jocks, mathletes, flaky teachers and subcultures galore, Cady climbs up - and slides down - the harrowing social ladder of junior year, and life in the jungle turns out to be cake compared to high school!