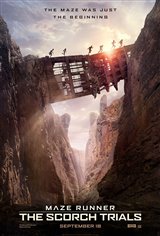 Now that the Maze trials are over and considered a success, Phase 2 begins: The Scorch.

Thomas (Dylan O'Brien) and the others find out that they were not the only maze in existence, full of young people being tested. He begins to suspect that they never escaped the maze, and that they're still captives.

They escape the facility where they're being held, but face an even more treacherous challenge on the open roads of a devastated planet.