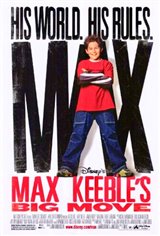 Starting seventh grade, Max Keeble (Linz) hopes for a new beginning and a way to escape his bullied past years at school. But he soon realizes that once again its business as usual with two schoolyard bullies after him and the principal out to get him.

When his parents break the news that he will be moving to a new city in a week Max decides it's payback time. Rather than put up with the normal routine of school, he begins an all-out plan for retaliation on all the bullies who have ever picked on him.