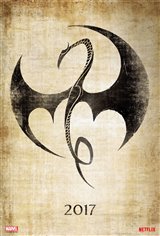 Young Danny Rand (Toby Nichols), 10, and his parents go down in plane crash in the mountains. The lone survivor of the crash, Danny finds himself stranded in the mountains. He's taken in by the monks of a place known as K'un-L'un, and is taught martial arts.

Years later, now in his twenties, Danny (Finn Jones) returns to his family's company Rand Enterprises in New York City, but no one recognizes him. When security tries to remove him, he uses his impressive kung-fu mastery and ability to fight them off.

He's finally able to convince people who he is, but his father's business partner, who has taken over Rand Enterprises, is less than pleased by Danny's sudden appearance. Nonetheless, Danny is determined to take back his father's company and rid it of the criminals and evil forces that have infiltrated it.