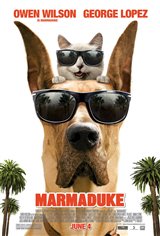 Marmaduke, the world's most lovable Great Dane, leaps from comic strip fame (appearing in 600 newspapers in over 20 countries) to big screen stardom. In this family comedy, the super-sized dog who never fit in, finally finds a place where it's okay to stand out. Now living large in Orange County, California, Marmaduke is helping his family make the big transition from the Midwest to The O.C. But he's also discovering that fitting in with his new four-legged friends isn't always easy for a 200-pound teenage dog.

Lucky for Marmaduke, he doesn't have to go it alone because he always has his "stepbro" and best pal, Carlos, a Russian Blue Cat, watching his back.