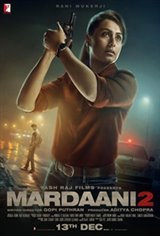 Rani Mukerji's edge of the seat entertainer MARDAANI 2 will release on 13th December.

The much-awaited cop thriller will see Rani reprising the role of the fearless and committed Superintendent of Police, Shivani Shivaji Roy in MARDAANI 2. She had delivered an outstanding performance in the superhit and hugely acclaimed prequel, MARDAANI, in which she took on the kingpin of a child trafficking racket.

So, naturally the anticipation is huge to know which crime Rani will fight against in MARDAANI 2.