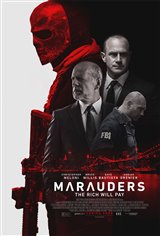 When the Hubert National Bank is robbed by a crew of highly skilled and violent robbers, not only is $3 million in cash taken, but owner Jeffrey Hubert's (Bruce Willis) brother Alexander is kidnapped and held as a hostage.

Alexander is murdered, prompting a group of FBI agents, including Jonathan Montgomery (Christopher Meloni), to investigate the heist. He discovers a conspiracy that goes much deeper than just a simple bank robbery.